We are excited to release the line up of event for the weekend!!! The descriptions of events will be listed below in alphabetical order. 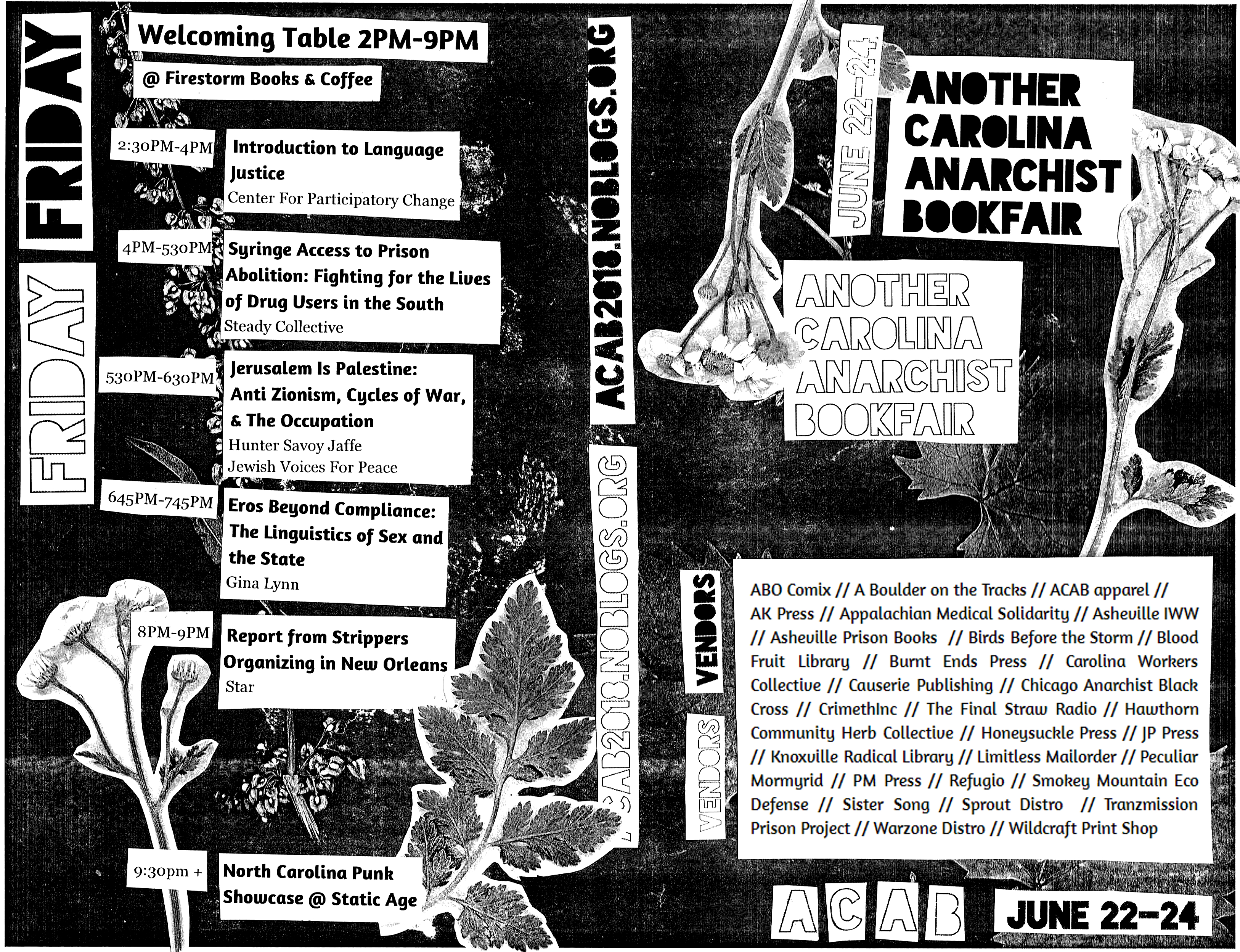 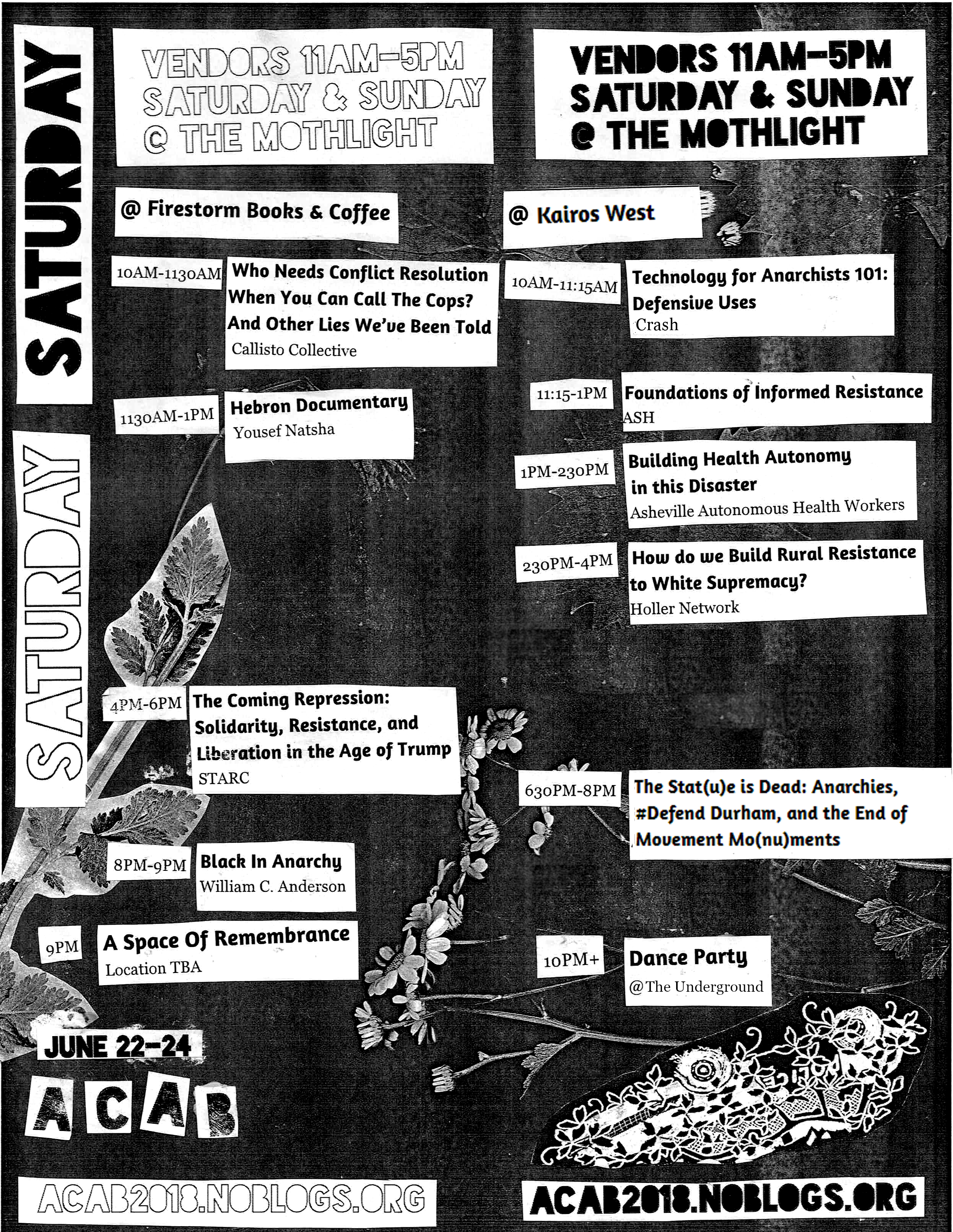 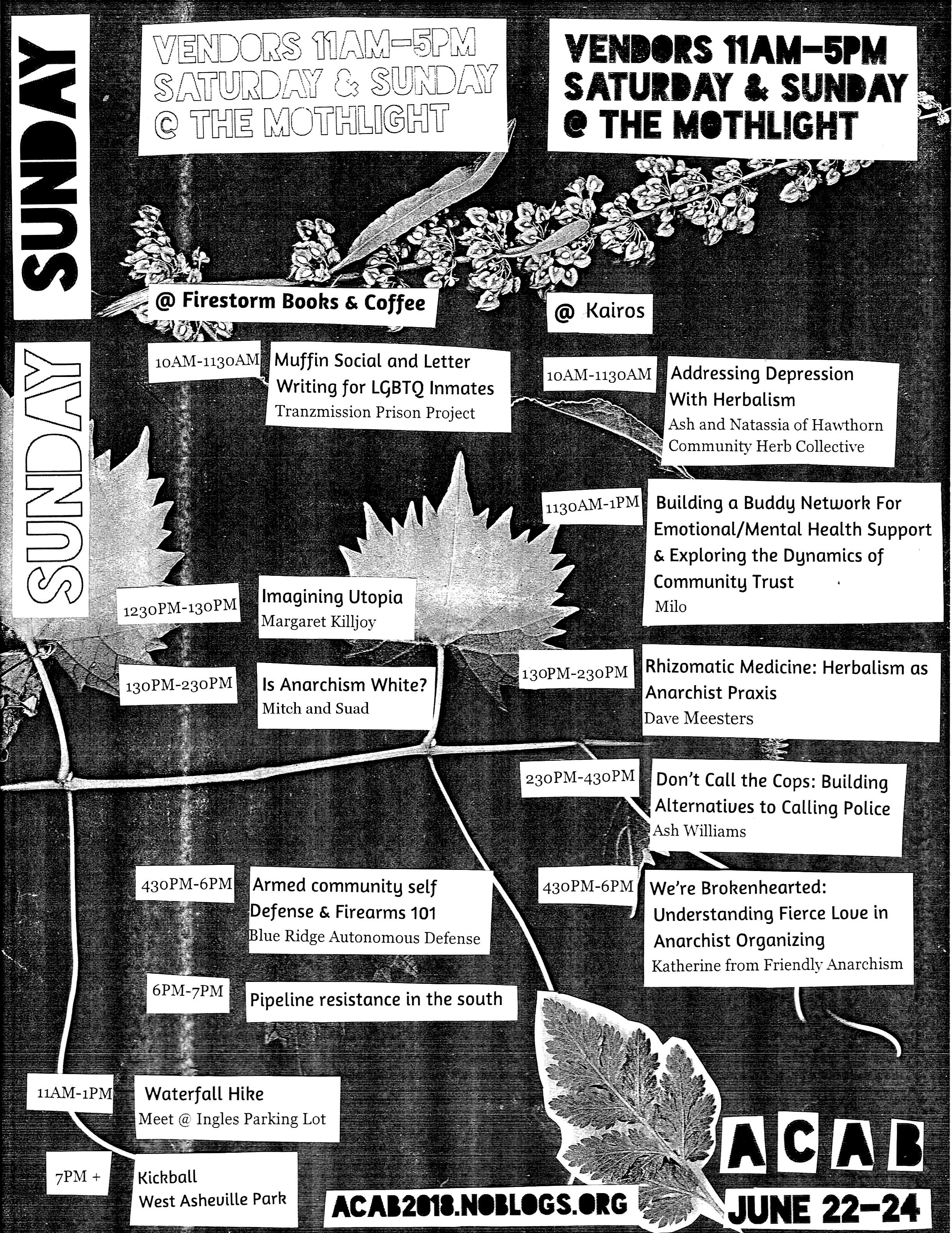 Understanding your own being can be one of the most empowering and accessible forms of health care. In this class members of Hawthorn Community Herb Collective will discuss various types of depression and alternative therapies that can help such as herbs, supplements, and lifestyle tools. Crafting personal formulas, recognizing patterns, creating support systems & finding ways to retain balance in a chaotic world are all topics that will be covered.

Armed Community Self Defense & Firearms 101
–Blue Ridge Autonomous Defense
We have formulated basic arms classes based around decentering the toxic masculinity typically inherent in most weapons training environments. We feel that with fascist and state violence escalating constantly, it is necessary for marginalized folks to at least have a cursory knowledge of firearms, even if just to ascertain if they are safe to pick up/ loaded.

Building a Buddy Network For Emotional/Mental Health Support + Exploring the Dynamics of Community Trust
–Milo
This “workshop” relies A LOT on the participation of the folks attending ** So, while I have an idea of what I would like to present or facilitate its almost more like a guided conversation with some activities involved to get folks engaged with each other. It’s almost like a little “choose your own adventure-conversation.”

BUDDY NETWORK: The buddy network is a practice that comes out of a group of folks who started getting together to talk about activism + mental health. We’ve come up with some ideas and practices that we’re working with to support each other and we’ve specifically created them in a way that encourages folks to take the idea and run with it. There’s a whiff of Emergent Strategy in the air – and not by accident. — This is probably the part where *I* will do the most talking (unless i can coax another buddy into helping me present, which actually would be awesome)

TRUST DYNAMICS: for lack of being able to draw a diagram for this (why i want a chalkboard, PS) = interpersonal relationships/trust = community relationships/trust = (back around and around again. This is the part of the workshop/conversation that is hopefully more carried by group participation. It works with questions like “What is Trust — How is it built? — How is it broken — How is it repaired? How does it affect the way you see others in your community? How does it affect your ability to feel engaged in your community?” My ego is not big enough to think that I have all the answers (and I know I don’t – that’s WHY I want to do this workshop!!!) I also don’t think that necessarily that everyone will have the same answers for these questions — it is a conversation that needs to be happening as a community. Also, Jenga might be involved — and I mean the big one :))

Building Health Autonomy in this Disaster
–Asheville Autonomous Health Workers
Open discussion of what health autonomy is and how it can be better achieved with involvement of various perspectives by people actively involved in health related projects.

The Coming Repression: Solidarity, Resistance, and Liberation in the Age of Trump
–Scuffletown Anti-Repression Committee (STARC)
Members of STARC will give a presentation and help guide discussion around state repression, what it is, strategies it has used in the distant and not so distant past, and some proposals for how to build more resilient movements that can whether the storm.

Don’t Call the Cops: Building Alternatives to Calling Police
–Ash Williams
-discuss what happens when the police are called and how they are taught to respond
-critically interrogate violence
-re-imagine visions of safety
-discuss differences between restorative and transformative justice
-assess the resources we have as a community to keep each other safe
-importance of not calling the cops 🙂
-raise funds and awareness for Gloria & Rayquan

Foundations of Informed Resistance
What are the results?
Scouting · Medical · Legal
Logistics · Funding · Communications
BUILDING STRATEGY TO WIN
What Sparks Resistance?
“If you know the enemy and know yourself, you need not fear the result of a hundred battles. If you know yourself but not the enemy, for every victory gained you will also suffer a defeat. If you know neither the enemy nor yourself, you will succumb in every battle.”
Sun Tzu
How are you organized?
What Are Tactics?
Actions taken to execute our strategy
and to meet our goals
How Are We Resisting Now?
What Does Success Look Like?
How do we hold our targets and ourselves accountable to demands?
Analyze Conflict

The Stat(u)e is Dead: Anarchies, #DefendDurham, and the End of Movement Mo(nu)ments
This panel and collective conversation confronts the frictions and possibilities involved when insurrectionist and reformist modes of building popular power struggle together to end mutual oppression. All three panelists have nourished anti-racist security teams in and beyond Durham, North Carolina ranging from digital defense, armed sentry duty, court support, reconnaissance, participatory defense, and more. In the wake of the Battle of Charlottesville, the toppling of a confederate stature in Durham, and the racial capitalist underpinnings of both, each panelist speaks personally and invites attendees to share their solidarity struggles. What does anarchist defense of non-anarchist mean tactically and for the longevity of anarchist praxis? How can defensive roles be proactively strategic and not compartmentalize identities? How do we fund our movements without disposability, professionalization, or terror? Join us and co-conspire.

Hebron Documentary: Film Screening
–Yousef Natsha
Hebron is a documentary that examines to what extent human rights are realized in a Palestinian community under Israeli occupation. Through provoking footage and interviews, this 40-minute film depicts Palestinian civilians attempting to exert their fundamental human rights, such as education, religion, movement, and dignity.

Filmmaker Yousef Natsha grew up in Hebron and began documenting the struggles and resistance of his community at the age of 19. Natsha has worked with local and international human rights organizations and with various forms of media – including radio, photography, and film – to tell the story of his community.

How do we Build Rural Resistance to White Supremacy?
–The Holler Network
In the fight against white supremacy rural areas and small towns are far too often overlooked by movements fighting for collective liberation. While much of the Left has written off rural areas as inherently racist and backwards, the far Right is often able to spread their white nationalist ideology with little resistance.

Is it possible to build multiracial movements against white supremacy in predominantly white rural areas? What are the challenges and opportunities posed by organizing in small communities where there is no radical subculture? How do we build our organizing against white supremacy so that we create solidarity and mutual aid rather than pitting white folks and people of color against each other?

Join us in exploring these questions and much more. We’ll share stories of our successes and failures in organizing in our communities and brainstorm ways we can build stronger movements for collective liberation in rural areas.

Imagining Utopia
–Margaret Killjoy
We will, as a group, imagine a future worth living in.

Intro to Language Justice
–Center For Participatory Change
A popular education space to explore language justice in our lives, communities and movements

Is Anarchism White?
–Mitch & Suad
A critical anarchist perspective on race and identity in radical politics. This APOC-facilitated discussion delves into the racialized history of far left politics in the US and seeks to confront the perceived whiteness of American anarchism.

Jerusalem Is Palestine: Anti Zionism, Cycles of War, and The Occupation
–Hunter Savoy Jaffe – Jewish Voices For Peace
The discussion would either be a presentation given by myself, or with folks I organize with as part of JVP, which would end up being a panel. Should the panel come through, it would include perspectives of Jews denouncing the State of Israel in support of Palestine alongside Palestinian born resistors currently living in Asheville. We would discuss the Occupation, daily human rights violations committed by IDF, the second antifada, resistance organizers in Occupied Palestine, the support of Israel by USA/Europe, Return The Birthright, and 45s deplorable decision to name Jerusalem the capital of Israel.

Muffin Social and Letter Writing for LGBTQ Inmates
–Tranzmission Prison Project
A vegan muffin/coffee social sunday morning to allow people to chill and hang in a low pressure setting while also signing cards of support to be sent to LGBTQ inmates.

Pipeline Resistance In The South
Going to be talking about how the fight against fossil fuel infrastructure has grown over the past 4 years in Virginia and also speak on the deeper implications of pipeline resistance (how it is connected to a fight against settler colonialism, white supremacy and capitalism)

Report from Strippers Organizing in New Orleans, LA
–Star
This presentation is a report from strippers organizing in New Orleans against police raids, criminalization, and gentrification on Bourbon Street. Collaboration and organizing among sex workers is both a natural and endlessly challenging facet of out lives and work. In addition to laying out recent efforts in anticipation and responses to attacks on strippers in New Orleans and an ongoing national trend, we hope to enter into a discussion which makes room for a multiplicity of experiences and spectrum of needs, risks and futures. If we are against work, what does a struggle to continue out ability to work safely become? How do we cut through through stigma, risk, invisibility, isolation- not in order to ‘fight for our jobs’ but rather fight for our liberation in all aspects of our lives?

Herbalism is inherently anarchist. Herbalists are unlicensed, unregulated, unsupervised, and of uncertain legality. We are outside the approved system and we like it that way. Our tools are in every field, forest, garden, spice rack, and overgrown lot. Herbalism spreads rhizomatically, adaptive and decentralized, always with the goal of empowering community health autonomy and resiliency, mending the rift between humans and the rest of life. Let’s talk about why this is, what it looks like, and how to take it further.

Technology for Anarchists 101: Defensive Uses
–Crash
A introduction to Tor and VPN–what they are, what they’re good for,
and where they fall short.
Infosec–how and why.
A brief workshop on removing one’s online presence.
An overview of tools and resources for using technology safely and
what safety means.

Syringe Access to Prison Abolition: Fighting for the Lives of Drug Users in the South
–The Steady Collective
People who use illicit drugs are one of the most stigmatized and criminalized groups of folks in the US. The South has the highest rates of incarceration and the worst performing, least accessible healthcare systems in the country. Folks who use drugs (particularly people of color, women, and trans folks) are disproportionately affected by these regional realities. In this workshop, we will explore ways to support drug users through harm reduction efforts, cop watch, and direct action.

We’re Brokenhearted: Understanding Fierce Love in Anarchist Organizing
–Katherine from Friendly Anarchism
Anarchism is rooted in a deep sensitivity to the pain of others and the world, which can lend anarchists to often beautiful, but also sometime unhealthy coping mechanisms as we navigate the particular difficulties of this characteristic. How do we stay healthy while sacrificing so much to help heal a broken world? Authoritarianism, toxic masculinity, white supremacy, patriarchy, ableism, and late stage capitalism converge to crush our spirits, vulnerability, passion, and empathy precisely because they are the key to a strong resistance. Mystic traditions throughout history, which are often very anarchic in nature, honor and value that sensitivity through specific personal and community practices. We’ll explore past and present mystic faiths to help us better understand some of the problems we encounter in our organizing and personal relationships which hinder our revolutionary action and solidarity.

“Who Needs Conflict Resolution When You Can Call the Cops?” and Other Lies We’ve Been Told
–Callisto Collective
a workshop on the importance and the practice of de escalation and conflict resolution within an anarchist context